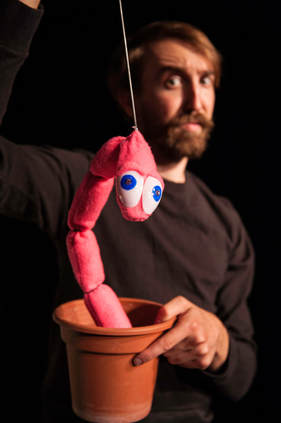 Seth Eberle is a Minneapolis based puppet artist who focuses on using various forms of puppetry to tell stories for family audience with a focus on contemporary marionette performance.  Seth started his puppetry career in college while pursuing a theatre and visual art degree, interning with the Bread and Puppet Theater, the Nordnorsk Opera of Norway, and In the Heart of the Beast Puppet and Mask Theater.  After graduating from North Dakota State University with a theatre arts degree and visual art minor, Seth went on a whirlwind tour of the United States from coast to coast touring a poetic puppet show out of a suitcase and eventually landing in Minneapolis.  In Minneapolis, Seth became an Associate Artist at In the Heart of the Beast (HOBT) where he honed his skills on Main Stage productions and Saturday Matinees with artists such as Bart Buch, Alison Heimstead, and Sandy Spieler. In 2014, he was a part of PuppetLab under the mentorship of Alison Heimstead.  Highlights at HOBT include Make. Believe. Neighborhood., La Nativdad, and kid enkidu. Seth also served as a teaching artist for 6 years at HOBT bringing many different forms of puppetry to schools and communities around Minnesota.

Outside of HOBT, Seth worked with various puppet artists  and companies in Minneapolis, including Torry Bend, Anne Sawyer, and Soozin Hirschmugl.  He has performed at Open Eye Figure Theatre, Eulenspiegel Puppet Theatre Company, Dreamland Arts, The Off-Leash Area Art Box, and the Minnesota Zoo.  He has created, toured, and performed various one-person puppet shows focused on nature and the environment in community centers, libraries, daycares, preschools and festivals around Minnesota.  These shows include Grandma Greta's Garden, The Ants Who Wanted to Fly, and Dream of Owls.  In 2016, he travelled to Prague to work with Puppets in Prague, learning how to carve marionettes in a traditional style using wood and central head rods. On returning, he worked closely with marionette artist Kurt Hunter for two years to hone in a more lyrical style of marionettes using only strings with funding from the Minnesota State Arts Board's Artist Initiative Grant and the Metropolitan Regional Arts Council's NextStep grant.  This lead to the creation of a show called The Loneliest Person in the Universe and several short-form puppet pieces.  In 2019, he created With Stars Above for family audiences at the Off-Leash Area Art Box using the more traditional wooden puppets.  From 2020-2022, Seth worked with Bernd Ogrodnik's Academy of the Wooden Puppet to learn more in depth carving and wooden puppet creation techniques earning a certificate of completion for the academy.  In 2021, Seth received a Jim Henson Foundation Family Grant to mount his production of The Box King at Open Eye Theatre in Minneapolis at Open Eye Theatre.

Seth's work has been seen locally and nationally including at the American Swedish Institute, the Czech and Slovak Sokol Minnesota, the Detroit Institute of Arts, and the Puppeteers of America Great Plains Regional Puppetry Festival - The Great Plains Puppet Train in West Liberty, Iowa.

As a teaching artist, Seth has worked in various artistic mediums and with numerous organizations.  He currently serves as an arts educator at Silverwood Park where he teaches at the intersection of the arts and the environment in programs that serve preschoolers, elementary age children, teenagers, adults, and individuals with memory loss.  At Silverwood, he works with community members to create a monthly public puppet show about the environment and teaches a bi-weekly art class that incorporates biology concepts into teaching visual art in addition to partnering with a local elementary school to facilitate an after-school puppetry and nature education program.  This work has led him to obtain a Graduate Certificate in Natural Science and Environmental Education from Hamline University where he worked to write curriculum that used interpretation of visual art and the making of artwork to compliment the teaching of environmental education concepts.

Seth has trained educators in using the art of puppetry in the classroom at the Dodge Nature Center, the Minnesota Association of Environmental Education, the Minnesota Naturalist's Association, and the Wilder Foundation Preschool.